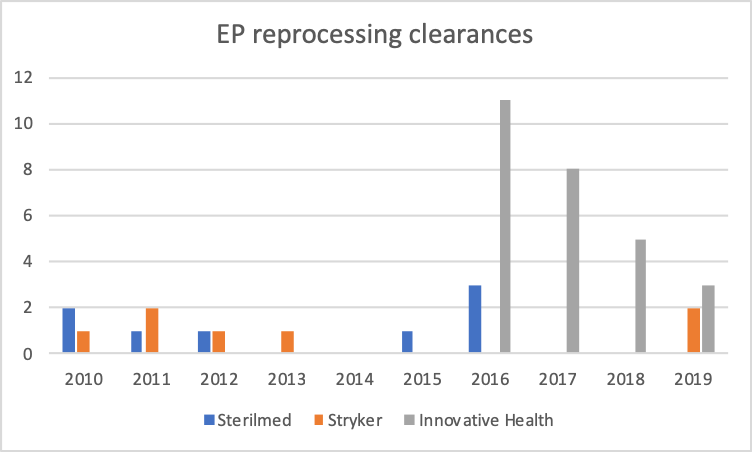 Some Catching Up, Others Taking a Break: Heart Rhythm Society’s 40th Scientific Sessions in San Francisco, May 8-11, 2019

At the annual Heart Rhythm Society conference – this year in San Francisco – scientific, clinical, management and manufacturing leaders in Electrophysiology gather to review and discuss new technologies and methods. Electrophysiology is one of the fastest growing and most expensive service lines in US hospitals, so technological and clinical innovation is important far beyond the exhibit hall in San Francisco. Specifically, we were hoping to see new technologies that, at the same time, improved patient outcome and reduced costs or procedure time – and increased access for patients. This is a legacy challenge in Electrophysiology, where new technologies have revolutionized what we are clinically able to do, but where the increasing costs of new technologies have made it difficult for EP lab management to offer such clinical advances economically to more patients. Some EP lab managers at the conference told me that it is a challenge for them to implement new technologies while still remaining profitable. In fact, one EP lab manager’s primary concern was patient access: “If I adopt these new technologies, most of which really don’t add quantum leaps in clinical efficacy, is it going to be at the cost of being able to provide the procedures for all the patients that could benefit from them?”, he said.

So, we went looking for new technologies that met this imperative of simultaneous clinical and economic advantages – but we really didn’t find anything. Some of the larger manufacturers appeared to be taking a break, showcasing technologies that were launched last year: Biosense Webster focused on their Vizigo bi-directional sheath. Abbott (St. Jude) were showing their Advisor HD mapping catheter. Sure, there were some refinements to the software system, and the scientific sessions had plenty of discussion about improvements in mapping, but new technologies from these two dominant EP manufacturers were absent. Obviously, this doesn’t mean they’ve stopped developing new technologies. I fully expect that their R&D teams are simply busy at work on the next mapping system or ablation catheters – and I hope they will support both clinical advancements and operational efficiency.

The largest four manufacturers, Biosense Webster, Boston Scientific, Medtronic and Abbott (St. Jude), own the vast majority of the market for diagnostic and ablation technology in EP. However, some of the less dominant players were catching up and challenged the dominance of the four. Last year, Philips acquired EPD Solutions, a cardiac mapping and navigation system. At this year’s conference, the company featured the mapping system on the exhibit floor. With this, Philips appears to be positioning itself as a mapping system provider for ablation catheter maker Medtronic. The companies announced that they will jointly market the novel KODEX-EPD cardiac imaging and navigation system.

During this time, Innovative Health received 24 clearances. In fact, we have received 7 clearances  since the last Heart Rhythm conference in 2018!

Another interesting challenge came from Acutus Medical and its development of a full EP solution on an open platform. There was a lot of attention paid by both technologists and clinicians to what was going on in their exhibit space - especially because it sounds like Acutus’ approach combines a focus on clinical efficacy with focus on operational efficiency. Acutus Medical received FDA clearance for a new version of the Acutus system in April 2019.

From our own industry, we also witnessed some catching up: Stryker Sustainability Solutions was able to announce FDA clearance for Abbott’s (St. Jude’s) ViewFlex Xtra ICE catheter, more than a year after Innovative Health received theirs. This is Stryker’s first new clearance to reprocess an EP device since 2013, when they received their clearance for the Agilis introducer sheath.

During this time, Innovative Health received 24 clearances. In fact, we have received 7 clearances since the last Heart Rhythm conference in 2018! We congratulate Stryker Sustainability Solutions and trust this is a sign that there is renewed commitment to growing EP reprocessing and making more savings available to hospitals. This only happens with an aggressive pursuit of FDA reprocessing clearances.

At the beginning of the month, Heart Rhythm Society had its 39th Annual Scientific Sessions in...
Read More

The Shift in Payer Mix and Single-Use Device Reprocessing

Last week, the Advisory Board published “3 reasons why you should prioritize EP procedures in the...
Read More

Scientific Study Confirms: Cut the Environmental Impact in Half by Using a Reprocessed EP Catheter

The single-use paradigm in healthcare is under attack The practice of throwing a device away after...
Read More
Go to Top